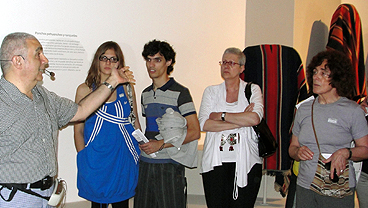 The bond that silverwork of the Pampas establishes between complex technologies and ancestral Inca traditions will one of the main aspects to be developed during Luis Gonzalez’ meeting with the audience this Saturday December 4, at 5PM, as part of the Encounters and dialogues program.

Doctor in Anthropology from the University of Buenos Aires and professor at the Department of Philosophy and Literature (UBA), González will visit Las Pampas: Art and Culture from the 19th Century,  an exhibition that commemorates the different cultures that inhabited this territory during the convulsive period of social political structuring.

González states that “silverwork from the Pampas constitutes a particularly interesting case study since it allows you to observe the way in which a complex technology is incorporated into a semi nomad society given the accelerated process of competition for prestige, collecting and altering some elements and meanings of the millenary metallurgic tradition of the Andes, with which they were in contact.”

South American Andes were amongst the metallurgic centers, comparable to the most distinguished of the Ancient world. Evidence of metal craftsmanship can be traced back to four millenniums ago and, in its long development, Native settler’s technology reached important technical sophistication.

For González, “a special feature of metal crafts of the Andes is that, almost exclusively, they were linked to the communication of social status, through the close symbolic relationships that materials held with the mythic-religious universe and its most relevant systematization took place during the Inca state”.

Luis R. González runs and takes part in anthropology research projects at the Ethnographic Museum. He studies the history of metal production in the region and its technical and symbolic aspects. He has published over a hundred papers on this topic and participated in numerous scientific meetings in Argentina and abroad.

Las Pampas: Art and Culture in the 19th Century brings together over 500 objects, silverware and textile pieces, from public museums and private collections. Its aim is to unveil the exchange of techniques and methods proper of the artistic production from the cultures that originated in the South American plains. The exhibition poses a series of topics that account for the identity of each of these cultures, through the diverse techniques used in the various geographical areas.