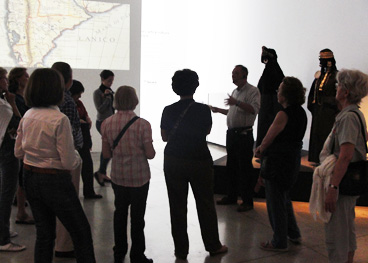 The configuration of an inclusive history that refers both to those who were there and those who came from other lands will be one of the main topics of this weeks expert guided visits to the exhibition Las Pampas by artist and researcher Teresa Pereda and Luis Pincén, cacique Pincen’ s great grandson, in occasion of the Dialogues and Encounters program. The visit will take place this Saturday December 11 at 5PM.

Curator of several exhibitions on Mapuche silverwork and textile production, Pereda highlights that the Pampas was an important commercial and cultural venue that included the provinces of Buenos Aires, La Pampa, the South of San Luis, Neuquen and Río Negro. Its intercultural character produced a dynamic landscape, which became one of its most outstanding characteristics.

“The guided visit”, Pereda emphasizes, “will not be merely descriptive, but also interpretative of the symbolic aspects of the works, amongst which it is crucial to give importance to the ethics of transcendence, which portrayed the native settlers’ cultures.”

Las pampas, gigantic dessert called “earth within” (“tierra adentro”) and scenery of violent riots, was the geographical context of ravaging, expulsions and migrations. “It was also an ethnic, cultural and political limit ” says Pereda, “and in that way a physical limit that materialized in the lines of the fronts (which were built in 1736), erected to divide the indigenous territories of the Pampas and Patagonia from the bourgeoning Estate. So as to survive, native settlers decided on two instances: the culture of resistance and of crossbreeding.”

Nowadays, these regions represent a multicultural and multiethnic space, where native settlers work intensely for the reaffirmation of their identity, the recovery of their history and culture, the defense of their land and language, bilingual educations, self management and leadership in their own communities.

Las Pampas: Art and Culture in the 19th Century brings together over 500 objects, silverware and textile pieces, from public museums and private collections. Its aim is to unveil the exchange of techniques and methods proper of the artistic production from the cultures that originated in the South American plains. The exhibition poses a series of topics that account for the identity of each of these cultures, through the diverse techniques used in the various geographical areas.